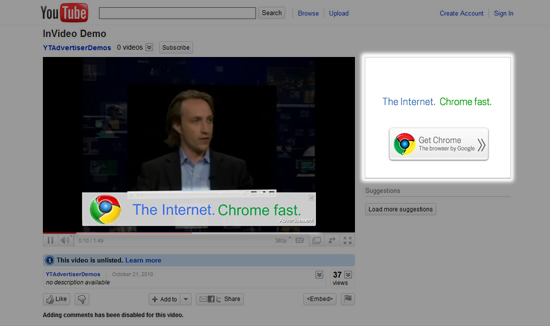 More Google sites will be getting the pre-roll ad treatment.

NEW YORK Google hopes to spread its pre-roll video ad alternatives from YouTube to other Web sites. Six months after it introduced overlay ads — transparent, Flash-animated placements that appear at the bottom fifth of the screen while a video plays — to YouTube, Google is starting to extend the format to sites in its content network.

In-stream spots, running either before or after content, remain the dominant form of advertising video. But Google has held that these ads provide a poor user experience because they are overly disruptive. In its first foray into video ads in 2006, it offered video ads within banner placements on partner sites, but those are all user-initiated. For advertising within streams, Google said overlay ads occupy a middle ground of interruption and invitation, communicating a message while inviting a user to click for a longer or more interactive experience.

“We found the overlay model was an optimal combination of performance for the advertiser, great monetization for the publisher and a non-invasive experience for the consumer,” said Christian Oestlien, a Google product manager.

The overlay format has quickly gained steam since VideoEgg first introduced it. In addition to Google, ScanScout and DailyMotion use variations of it. Yahoo! last week started another alternative to the pre-roll experience: a three-second spot that retreats into a banner on the top of the video player.

It is supplementing the animated overlay ads with text versions that it will cull from its several hundred thousand advertisers. Those will be priced on a cost-per-click basis, while the animated overlays get cost-per-thousand rates that Oestlien said were typically near $20.

Google executives would not say how much reach its network has, only that it would encompass “hundreds of millions” of streams.

Advertisers can target their placements either by specific site or channel. Google is also targeting based on the page’s content, video title and other hints it can glean of the video’s subject matter.