What Does HA in the Cloud Mean? 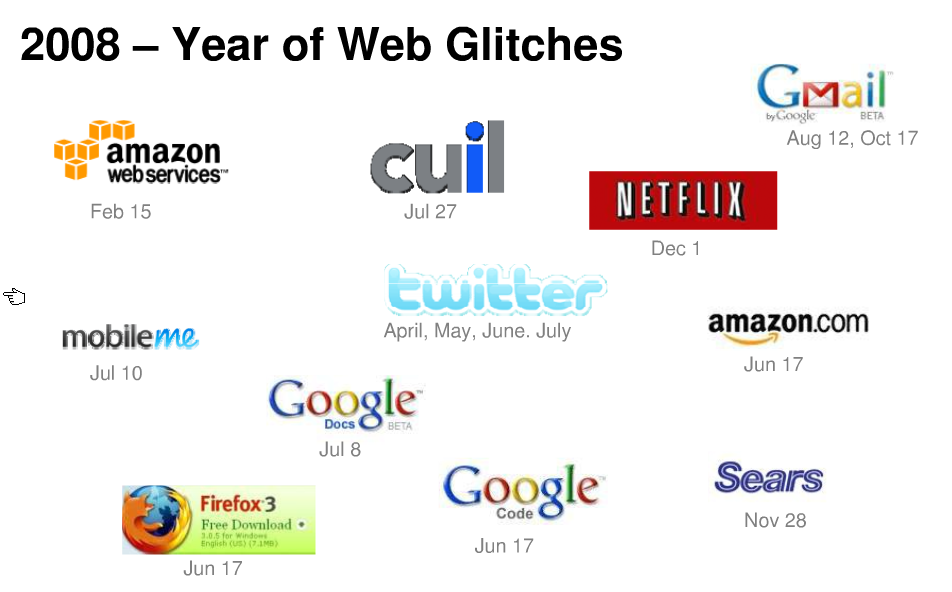 What is High Availability (HA)? My best definition is best depicted in terms of the following example:

High availability in the cloud will exist at every level of the hardware and software stack including:

This typically means that you have redundancy built into your architecture by: 1) using multiple datacenters (leveraging redundancy across them), and 2) benefiting from redundancy for all resources within the datacenter (e.g. multiple air conditioners, etc.)…..this doesn’t include redundancy for the compute platform components.

The following definition for the classification of data centers is typically used:

True story…to this day, I remember getting a page at 3am in the morning (I had my VP of Operations set up an automated text message sent to my phone for all Severity level 1 & 2 support calls). It so happened that at 2:45am the datacenter had an air conditioning outage. Of course, there was an automatic switchover to a redundant unit, which also failed.

I and my staff were notified of rising temperatures on our SaaS platform (at the time this platform was a 100 node cluster consisting of several sub-clusters). By the time the datacenter issue was addressed, our system had experienced such high temperatures that we began to detect failures in our database cluster (more pages). Although, database failover occurred automatically, multiple database servers failed intermittently (the worst kind of failure).

By the time we manually recovered from the database cluster failures, the customer had experienced approximately 228 minutes of what we classified as a “Severity 1” defect with a SLA which was significantly lower, of course.

Needless to say, I personally made some very uncomfortable calls to the customer, and we then made some additional changes to our system HA design to insure that this 3-sigma event wouldn’t occur again. I’ll add, this was not the only time we had datacenter-level issues. My other story was when the datacenter staff was testing their redundant battery backup and accidentally powered down our entire system and scrambled the brains of our Orca disk array subsystems!!!

High availability for your hardware resources (computing, storage, and networking) begins with redundancy. With storage, my experience involves using disks in a RAID 5 configuration. In addition to this, we deployed 100% redundancy (RAID 1) across a separate cabinet preferably in a separate datacenter (e.g. RAID 5 on a server and then those disks mirrored on another server with RAID 5). This insured us against two disks dying within one storage subsystem, against a storage subsystem going down, against a cabinet going down, and against a datacenter going down (see my previous story).

Then we built in redundancy into our processing nodes by deploying commodity clusters (a number of Linux servers which were a part of the same resource pool servicing a suite of specific applications). Each of our servers where inherently redundant using a HA cluster configuration. In addition to this, we had redundant IO/controller cards (storage and network), redundant power supplies within the server, and redundancy built into our cabling schemes (e.g. redundant cables to NIC cards). We also made sure that servers within a certain functional cluster were distributed across multiple cabinets.

Lastly, our architecture included redundancy for all our switches (networking gear) similar to our compute nodes.

They don’t get much press, but there are many better high availability options available for Linux. Here are a few:

Linux-HA is an open source project which offers software, Heartbeat, which is a daemon that provides cluster infrastructure (communication and membership) services to its clients. This allows clients to know about the presence (or disappearance!) of peer processes on other machines and to easily exchange messages with them. Heartbeat is also a leading implementor of the Open Cluster Framework (OCF) standard and when combined with a resource manager like Pacemaker, is competitive with commercial systems. The current stable series of Heartbeat can be obtained for many linux platforms (including CentOS, RHEL, Fedora, openSUSE and SLES).

The following Linux distributions are more likely to be deployed in larger datacenter environments. I also include a reference to HA features (commonly included as a cluster offering):

An example of VM HA includes Citrix’s partnership with Marathon Technologies, whose EverRun product not only recovers and restarts the virtual machine and its software stack but the application data as well. EverRun monitors the exchanges between a running virtual machine and its hypervisor, detecting when work is interrupted and moving the VM to a healthy server.

In order to understand the enhanced levels of HA that everRun VM offers, it’s important to first understand what XenServer HA does and does not address.

With that in mind, adding everRun VM to an existing XenServer HA implementation now adds some useful new functionality:

VMware HA simply provides failover protection against hardware and operating system failures within your virtualized IT environment. VMware Fault Tolerance provides continuous availability for applications in the event of server failures, by creating a live shadow instance of a virtual machine that is in virtual lockstep with the primary instance. By allowing instantaneous failover between the two instances in the event of hardware failure, VMware Fault Tolerance eliminates even the smallest of data loss or disruption.

Application software (including the base OS) is covered by a host of independent solutions including (but not limited to):

A central concept with most high-availability solutions, is the system heartbeat. One server sends a signal to the other to determine system and application health. Heartbeat communication path options include serial port and LAN. It is a good idea to use multiple paths, such as serial and LAN or multiple LAN connections.

The failover models include active/active, active/standby and N+1. In active/active configuration, each server in the cluster is providing its own set of applications and services. If one fails, the other takes over. Users may experience some degradation of services, because the remaining system is serving both sets of applications and services, although it does allow for maximum resource utilization.

Active/standby provides the best continuity of service after a failure. However, it requires a redundant system and the associated cost. In N+1 configuration, one standby system provides failover protection for multiple active systems. This configuration provides reasonable utilization of resources while minimizing cost. If multiple failures should occur, users still may experience some increase in response time. Alternately, other active servers could be configured to take over.

IBM’s Tivoli is one of the most recognized encumbants in the “legacy” system management software space, and one we always competed with while I was at NCR Corporation.

All these HA software suites helps meet high levels of availability and prevent service disruptions for critical applications and middleware running on heterogeneous platforms and now virtualization technologies. Functionality varies, but generally has a list similar to the following:

HA Comes at a Cost 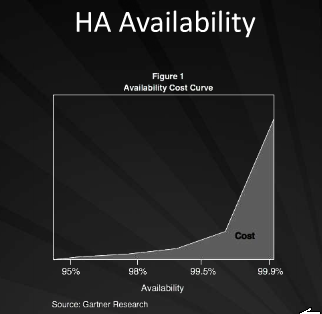 The quick answer….YES! As you add HA within each level of the system, you’re paying more in hardware, software, and even IT resources (although some will say this expense should actually decrease with the HA automation).

The Future of HA

Is there room for anything outside of VMware?

High-availability processing was pioneered by the long-defunct Tandem Computing, whose NonStop computers twinned and shadowed every hot-swappable component, with transfer of processing between “sides” under the supervision of the Guardian NonStop Kernel (NSK) operating system.

If you substitute “VMware ESX” for “Guardian NSK” in the above paragraph, you have an almost exact description of VMware’s plans for the future of a high-availability computing architecture. In this model, virtual computing resources, including CPU, storage and memory, are added and replaced on the fly, while workloads are shadowed by virtual machines (VMs) and entire data centre operations can be migrated without interruption to different physical processing locations.

There’s a much broader set of high availability functionality than VMware HA. What if you want to use multiple clouds? Say you want to have AWS and Zimory provide you services and you balance across them? Why not? In the digital media world, I used both Alkamai and Limelight, leveraging one against the other and using one as a failover in case response times didn’t meet my specs. 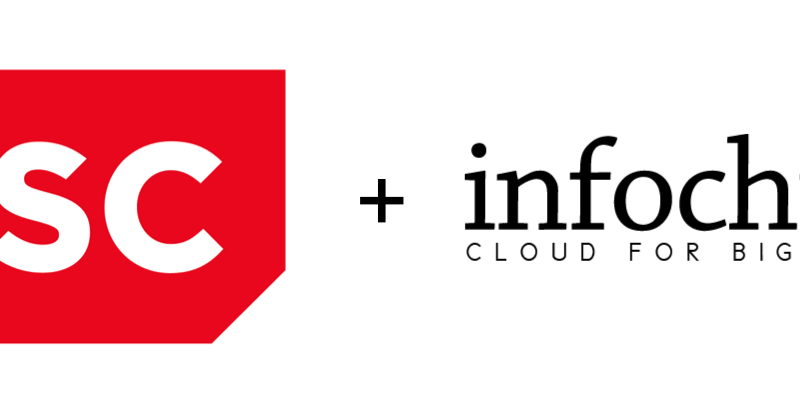 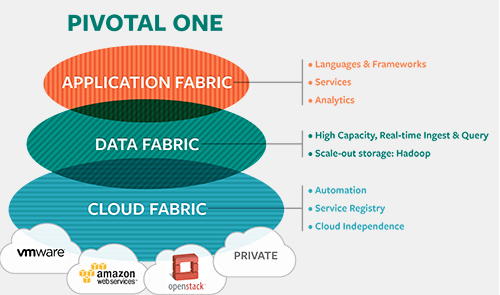 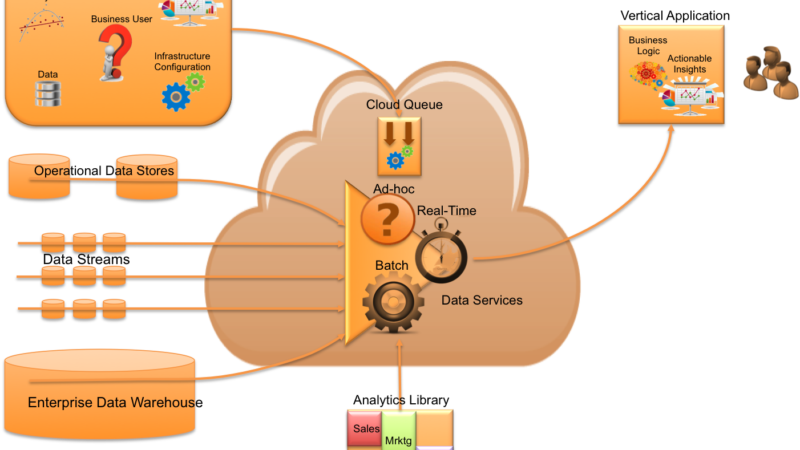 One thought on “What Does HA in the Cloud Mean?”