The music video for the surreal folk song “I Got a Bunny,” written and performed by Juanito Moore, is not something you will see on VH1. 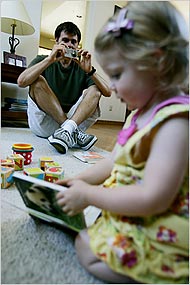 Photographs by Sandy Huffaker for The New York Times

But the video, shot on a rainy sidewalk in front of Mr. Moore’s home in Grand Rapids, Mich., has another distinction: it was assembled, not in a traditional cutting room or with PC-based editing software, but entirely on the Web, using an online service called Jumpcut.

The minute-and-a-half video was shot with a digital still camera, which Mr. Moore occasionally swings around by its tripod as he lists the bizarre animals in his imaginary menagerie.

While sites like YouTube and Veoh have lately become popular for allowing users to share their self-produced videos, Jumpcut (www.jumpcut.com) is part of a new class of sites that also offer simple tools for stringing together video clips and then adding soundtracks, titles, transitions and unusual visual effects.

All of the sites, which include Jumpcut, Eyespot, Grouper and VideoEgg, have been introduced within the last year. This summer, they will be joined by another site, Motionbox, based in New York.

“We wanted to make video editing over the Internet faster than desktop editing,” said Jim Kaskade, co-founder and chief executive of Eyespot, based in San Diego. “We think it will broaden the base of people who are creative, but may not have thought they were, by creating this tool kit for them. Editing video is eventually going to be as simple as sending e-mail.”

Mr. Kaskade refers to the process as “mixing,” however, saying he believes that the term “editing” may sound labor-intensive to the amateur videographer. Previously, putting together a multishot video like Mr. Moore’s would have involved installing and learning to use a piece of software like iMovie from Apple, Adobe Premiere or Studio from Pinnacle Systems. Some of that software is packaged free with new computers or sold for about $100.

But with more videos of soccer games, weddings and cruise vacations being posted online — and potentially being seen by people who have not been dragooned into the living room for a showing — editing gains in importance, Mr. Kaskade says, even if it involves trimming only the dizzying camera whirls at the beginning of a shot, or the inevitable question, “Are you taping right now?”

GK Parish-Philp, a product manager at a San Diego software company, said that while he used Pinnacle Studio to assemble a video of his daughter’s birth a year and a half ago, he had not used it in a long time. The birth video “came out really well, but it took forever,” he said.

Instead, Mr. Parish-Philp now uses video clips taken with his digital still camera and edited on the Eyespot site (www.eyespot.com) to provide weekly video updates to his mother in Texas. One chronicled his family’s recent trip to the San Diego Wild Animal Park, complete with deft cuts between close-ups and long shots, plenty of pointing at animals, and a soundtrack by the 1980’s pop group Toto. (Their hit “Africa,” of course.)

Many of the early users of online video editing are new parents like Mr. Parish-Philp, or pet owners, said Kevin Sladek, co-founder of VideoEgg (www.videoegg.com). “We see a tremendous diversity of things,” Mr. Sladek said, “but the largest bucket of footage is baby videos.”

Other users have been editing videos to support online auctions, as when Todd Hernandez tried to sell a Nissan 350Z coupe on eBay this year, or to stay in touch with friends back home, as when Lisa Boghosian, who moved to San Francisco recently, made a St. Patrick’s Day video collage for her Irish friends in Massachusetts.

The number of online editors is still small, however.

“Eighty percent of our users want to watch videos, and about 20 percent want to share videos,” said Jonathan Shambroom, a vice president of Grouper. “But only a small fraction of that 20 percent will edit their videos first — maybe a quarter.”

All of the sites, except Grouper, require that video clips be uploaded to their servers before they can be manipulated. That can take a long time, and there are limits to the size of the files that can be sent. (For Jumpcut, the limit is 50 megabytes per clip.)

Users of Grouper (www.grouper.com) must first download a free piece of Windows-only software that works in tandem with the Web site. It permits users to trim and rearrange clips on their computer and upload only the finished product, in compressed form.

The sites make possible new kinds of collaborative editing. A group of parents attending a school play can upload all their video, and then edit a single version of the play that makes use of the best shots. Or a vacationer who returns with a shaky shot of the Grand Canyon can incorporate another person’s river shot into the video — the home-movie equivalent of stock footage.

Mr. Parish-Philp, who lives in California, assembles weekly video updates of his daughter and posts them on a Web site, where his mother in Texas can watch them.

“Before, moviemaking was ‘one computer, one author,’ ” said Jumpcut’s chief executive, Mike Folgner. “What we’ve done, on a team level or a group level, is allow people to share these assets. You can make a movie out of anybody’s stuff.”

Steven Cohen, a Hollywood editor who was in the early 1990’s one of the first in his profession to rely on a digital editing system for making a feature film, has tinkered with Jumpcut and Eyespot. While the current services are not as responsive or flexible as the high-end software he is accustomed to using, “online editing seems inevitable,” he wrote in an e-mail message. “What makes it appealing is that it gets rid of the problem of storage, and for that reason it seems very freeing. Let somebody else worry about where all this stuff is and how to back it up!”

Many of the earliest users of the online editing services report two changes in the way they capture and assemble video. First, they tend not to use their camcorders as much, because the tendency with a camcorder is to record long, meandering stretches of birthday parties and parades, which are time-consuming to import to a computer and edit. Instead, they record more impressionistic scenes of a few seconds or a few minutes, using a digital still camera or a cellphone.

Second, even if they have experience using more powerful, PC-based editing software, they find themselves using the online services more often when they are working with the shorter snippets — and trying to assemble them quickly for a grandparent in a distant city.

Jan McLaughlin of North Passaic, N.J., makes three or four short movies a week, often using her Nokia cellphone. She spends only about 5 or 10 minutes, on average, refining her video with Eyespot.

“It’s the difference between making a gourmet meal that takes days, or throwing something in the microwave,” Ms. McLaughlin said. “Ultimately, sometimes you just need to separate the good footage from the bad and stick it together.”